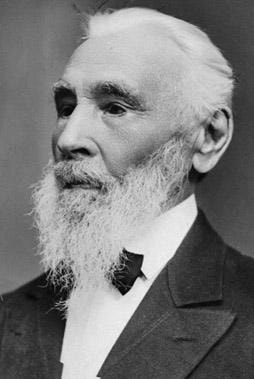 John Erlander
John was born in Slätthög, Kronobergs län, Småland, Sweden on April 7 1826. He emigrated to the United States in 1854 with his sister Kajsa Jönsdotter, and his brother Peter Magnus Jönsson. Their father was Jöns Petterson, so their name was Jönsson.
​ (Note: Surnames were not solidified in Sweden until the late 1800's. Until that time children were identified by their father's first name with the addition of either "son" or "dotter" to the end of the name--depending on their gender.)

John Erlander first settled in Chicago where he learned to operate a new, timesaving invention...the sewing machine. In 1855 he came to Rockford and worked as a tailor. His employer had a sewing machine, but did not know how to use it. John did, however know how to use it, and added to the business success through increased productivity.

Erlander was involved in several business ventures during his lifetime. In 1861, he entered into a partnership with Sven August Johnson (often referred to as S.A. Johnson). They open a tailoring and men's clothing shop on East State Street, naming their business "Erlander & Johnson". According to John Erlander's son Alfred, the men entered into their partnership with the agreement that they were to share everything equally...and as the Vikings did, they swore in blood to keep the pledge. The clothing store flourished, and the partners remained in business until 1885 when Erlander sold his half of the business to Johnson. He was 59 years old at the time.

In 1876, the Rockford Union Furniture Company was organized by a small group of men meeting at the Erlander home. Jonas Peters, Erlander's brother-in-law, had saved some money while serving in the Civil War. With this seed money Peters started the Union Furniture Company. John Erlander was elected President of the company. Jonas, formerly a cabinetmaker's apprentice, served as Treasurer/Manager, and P.A. Peterson was elected company Secretary. The Union Furniture Company was a cooperative association with 25 members. Members helped to raise the initial capital for the business. It was the first of 25 area furniture factories that were formed as cooperatives. John Erlander was involved in several other business ventures and provided leadership in the Rockford community. He served on the boards of the Excelsior Furniture Company, the Central Furniture Company, and the Rockford Brick Company. He was also one of the primary organizers of the Swedish Mutual Fire Insurance Company, and was a stockholder in Manufacturer's National Bank.

Mary Erlander
Mary Olivia Erlander, was born October 16, 1870, the sixth child of Swedish immigrants John and Inga Stina (Petersdotter) Erlander. Inga Stina was John's second wife, and the older sister of his first wife. Mary, the youngest daughter grew up during an era when "a woman's place" truly was the home. Women were considered the moral guardians of home and society. In middle-class homes, like the Erlanders', a woman was expected to manage her household, usually with the help of one or more hired servants. A succession of young, Swedish immigrant women served the Erlander household.

Young middle-class women, like Mary, were expected to learn how to fill their free time "productively." They were taught to paint, sew, play music, and to read. Mary became very adept at sketching and watercolor painting, filling the Erlander home with art. The painted borders in the parlor are one of Mary's many contributions to the atmosphere of the Erlander home.

Mary also designed and painted the family's outgoing Christmas cards, her father's business cards, and note cards that she frequently sent to friends.  During the construction of their new home at 404 South 3rd Street, Mary's older brother, Alfred, then eleven, often walked baby Mary to see the home being built. Mary lived in the house most of her life, selling it to the Swedish Historical Society of Rockford in 1951. Mary died January 13, 1968 after an extended illness at the age of 97.

​Samples of her work are shown here: 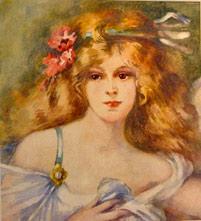 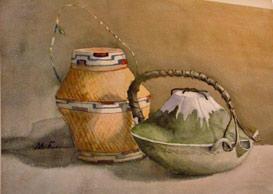